Breakfast is hard for me during the week.  We eat breakfast after we get to work and neither of us really like standard breakfast fare: cereal, toast, etc.  Sometimes I’ll eat plain greek yogurt and berries or fruit, but otherwise it’s always a struggle to figure out what to eat.  I think Lo usually eats half of his lunch or something left over from lunch the day before unless I make something ahead of time.  We both work out at lunch so we need to have something substantial enough to make it through the workout (protein), but light enough that it isn’t sitting in our stomachs (which carbs often do for me since I don’t usually eat until 9:30 or so).  Since something made with eggs seems to be the best option, they have to be made the night before or earlier, because I literally only give myself 30 minutes tops to get out the door in the morning (shower included). This recipe is easy – mix the stuff together in 10 minutes and bake.   You can substitute anything that you want – veggies, meat, rice.  I’ve found that it doesn’t even matter the proportion of egg/milk to veggies, as long as the veggies are somewhat covered with egg mixture. 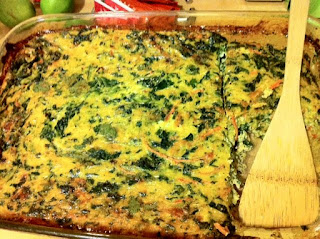 -1 cup frozen chopped spinach , thawed, drained and squeezed dry
-1 cup cooked, shredded spaghetti squash
-2 beaten egg
-6 egg whites
-2 cans evaporated skim milk
-1/2 cup cheese of your choice
-plenty of seasonings – i used garlic, dill, rosemary, sriracha, red pepper flakes, onion powder, salt, and pepper – just shake, shake, shake
-Crust: (I make it crustless now, but if you can eat gluten, it’s tastier to use seasoned breadcrumbs.
-cooking spray
-2/3 cup bread crumbs
Preheat oven to 350 degrees F. Pierce squash several times with a fork, and place in a microwave-safe dish. Microwave on high for 10 minutes, turn over, and continue cooking 10 minutes more. Cut squash in half lengthwise and scoop out seeds. Set aside to cool.  Using a fork, scrape out the strands of squash.  (I usually cook the squash another night and use 1/2 for “pasta” and then the other half for the quiche  – it’s usually closer to 2 cups).

Place squash in a mixing bowl. Stir in egg, egg whites, evaporated milk, mozzarella cheese, and spinach until well combined. Spray a 13×9 baking dish with cooking spray. If making “crust”, spread bread crumbs in the bottom and around the sides to coat. Pour egg mixture into prepared dish. Bake quiche in the preheated oven for 45 minutes – 1 hour, or until a toothpick inserted in the center comes out clean. Allow to cool for at least 10 minutes before cutting. Serve warm or at room temperature.  This is excellent topped with salsa.
Options – this recipe could be made with any veggie combination – just use 2-3 cups of whatever you want.  You can also get away with only 1 can of evap milk – I know I have in the past – just add some additional egg whites so the veggies are mostly covered.